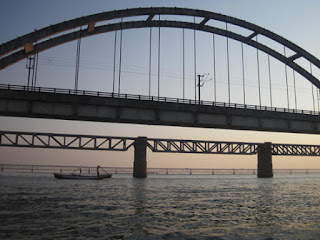 At 70 with his wife long dead, life held no charm. He had taken to liquor to drown his sorrow. As drunken men are wont to he came home sometimes in inebriated condition blabbering and making a nuisance of himself. Otherwise he was a quiet man spending time in the local free library or in the park watching children play. But his daughter-in-law taunted him much and hurt him always with barbs of insult saying he was a worthless burden. She did not permit the grandchildren to come near him. The only saving grace was his son being considerate to him but he was afraid of the termagant. When she was within his earshot, he would raise his voice and tell his dad with a wink”Can you not keep your room clean?” and inserting under his pillow at the same time a packet of orange candies that the old man loved. That reprimand would keep the woman happy but it was the son’s affection that kept the old man put up with all indignities.
But things went too far this afternoon when he broke a glass vase by mistake. She raised a hell and in anger asked him to leave the home if he had some shame left in him. He didn’t know where to go and what to do. He wished to put an end to his life as there was no purpose in prolonging it. The only way that he knew which many others have done before is to jump over the railings from the bridge across the wide river. He had no guts. He drank a whole bottle of the heady liquor. It was dusk and the sun was setting fast. There were not many walking .Cars were whizzing past in speed. He could see a couple of men sitting in a bench a little yonder. As he neared the railing in the middle of the long bridge, he saw a young girl of around twenty standing already there. She was craning her neck to see the river down below. The old man sensed that things were not all right with the girl. He hurried towards her. He could see that she was not happy about his intrusion.
He forgot what for he was there. His mind was occupied fully with the girl.”Hey, what are you doing? Why do you lean on the railing so dangerously. The water is swirling in current and it is deep there” he said with a concern.
She did not answer and instead she started sobbing.”What is bothering you, young lady?”Why do you cry? Whatever you plan to do is not the right way. Tell me your problem. May be I can help you” he said softly.
Sorry Uncle. The only way you can help is not to stop me from putting an end to my life. Please leave me alone and go your way” she pleaded.
“No, I have no such intention of leaving you in this miserable state. Come with me and tell me your problem. Taking one’s life is an extreme step that cannot be reversed. Please be sensible” he persuaded her.
The girl instead of responding suddenly lunged forward towards the railing. The old man reacted with alacrity and caught her by her shoulders and pulled her away from the railing. The girl immediately raised her voice and shouted “Save me, save me.”
The two men who were sitting a little away came rushing and caught hold of the old man and started assaulting him. The old man pleaded”This woman was about to jump into the river. She told me that she was ending her life. I saved her from jumping.”
“It is a lie. He made some indecent proposal seeing me alone. I asked him to go away. When rebuffed, he tried to misbehave with me” she accused him
“Yes, we were watching from a distance. Although an old fellow, he was troubling her for some time” said one of the men.
“Oh my god, she is young to be my granddaughter. She is lying I do not know for what reason. Believe me, I have my son and grandchildren” wailed the old man
“Okay, how much money do you have in your pocket?”one of the two men asked
“May be three or four hundred” the old man replied
They felt his packet and ferreted out six hundred and odd rupees. They retained two hundred and gave the balance to the woman telling her “Take this. He is an old man. Let him go this time” She quietly pocketed the money and started walking along with the men.
The old man knew he was conned. As he entered the house he heard the termagant shouting at the top of her voice “Where has that old nuisance gone? Does he think this is a choultry open for him to come and go as he pleases? It is my bad luck to be stuck with such a burden”
The old man quietly tiptoed to his room biding for another favourable time.

Posted by KParthasarathi at 9:25 PM