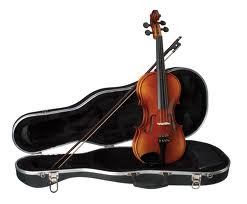 Rajalakshmi mami must have been a very beautiful in her younger days. But the pangs of hunger and poverty had left their marks on her shrunken face. But it could not rob even at the age of 70 her natural dignity, smiling eyes and her poise. She lived in one of those several dark potions adjacent to each other at the rear of the narrow house with her husband who was bed ridden. Who else could one blame but the quirk of fate that brought the once rich lawyer and his wife to this abject state? They were rolling in wealth once but some foolish investments, certain wrong decisions and reckless generosity eroded whatever they had. Today they were virtually on dole from a kindly relative. Mami was supplementing her income by teaching violin till a couple of years back before arthritis chose to reside in her. Her dad had taught her violin when she was young from a vidwan of great repute till she had mastered the art to the level of accompanying senior musicians. But the lawyer husband forbade her playing in public and she had to be content teaching her art to the young chits.
Among the many of her wards who had grown big in the field of music, the famous Thirunangur Naryanan is one. He was a poor lad with passion for learning music but had no means to learn from a teacher .Mami took him in her fold and taught him free besides getting a violin for him free during her well- to-do days. The alert boy picked up the nuances of music with alacrity to become in due course a leading violin vidwan.But he had not forgotten his roots and often visited mami and her husband with fruits and new clothes. He knew they had become poor and needed financial support and he was willing to help. But mami’s pride would countenance no such favour having been accustomed to give rather than take. She would accept only the fruits and return the clothes however badly she needed them.Narayanan would return back sad with moist eyes. When the landlord of the portion wanted to increase the rent, Narayanan made a secret deal with him that he would bear the increase without mami being aware.
Mami’s husband became sick with fever. It was more than a week the fever had not subsided. The kindly doctor in the neighbourhood, who treated them free and dispensed free samples he got, wanted them to have certain tests done at a laboratory.Mami had no money or anything to sell save the old violin that her dad bought decades ago. All the other violins that she had acquired, she had disposed off one by one whenever the need arose. This violin she had kept in her puja place alongside the gods. It brought her always happy memories of her younger days when her dad took her to a shop and got her this violin. She had learnt her basics with this instrument. Her husband had grown weak and the need was urgent. She was ready to sell and told the landlord’s wife to let her know whether someone was willing to buy .
The next day a young man came to mami and wished to see the violin.He played on it and was greatly impressed. He offered to buy at whatever price she was willing to sell it for.
Mami said ”I don’t know the price of violin. I would need a thousand rupees for my husband’s treatment. I do not know whether it is worth it.”
“Mami, you are still in thretha yugam.Do you know how much a good violin even for basic model for a beginner costs these days. But this is of superior quality. Thank god, I came as otherwise you would have been cheated. Here is Rs. 10000, please accept it. I have made a good deal” the boy said
“Ada paithyakara (mad man). This has remained unused for several years and not worth even the thousand I had asked for greedily because of want. Give me just that amount and take the violin. I am grateful as your money will enable me to treat my husband” mami said.
“Mami,I have heard about you and how you have been instrumental in bringing out great vidwans.This violin has some sentiment for me that cannot be measured in rupees. I am highly employed and can afford. It may fetch more if sold to a connosieur.Please accept Rs.10000 and bless me” the young man said and fell at her feet.
A month later when mami’s husband had recovered completely, Thirunangur Narayanan visited her. After pleasantries, he said ” Do you remember the young man who bought your violin. He was learning from me. But unfortunately he had to leave for Europe permanently on work. He left the violin with me requesting me to return it to you. He wanted it replaced in the puja space as before.”
“Oh my god, I have spent the money on treatment. How can I return the money” she said with a shock
“Who asked for money? He has left with specific instruction that no money should be taken back” said Narayanan.He did not intentionally mention that the young man was his son.
Mami was speechless with tears flowing from her eyes.
Posted by KParthasarathi at 12:23 PM